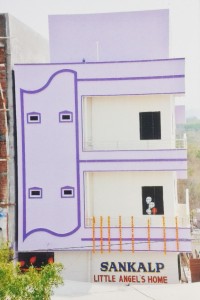 The orphanage had humble beginnings at Miss. Rosy’s home, inspired by her human compassion for helpless and lonely children. The children who approached her for food, stayed back as they had none else to go back to. Most of them had lost one or both of their parents and many others were victims of cruelty at the hands of the members of extended family. They were exploited by people, who lived on the money they earned begging and doing menial jobs.

Miss. Rosy started the orphanage, the Little Angels’ Home, by having it registered it with the government. In 2011 there were 11 children, living in a shed in Papireddy Nagar. The land for the orphanage was donated by a philanthropist. As the news spread about the orphanage in different ways, the media, police, pressmen and railway employees started surrendering orphan children at the orphanage. Police of Sherilingampallly alone handed over 6 children to the home, after they were taken into their custody when found roaming around. By the year 2012, the number of children in the home grew to 17. In 2013 there were 22 children and in 2014, five more children joined the orphanage. Now, there are 27 children, who are fed and educated by Sankalp Foundation. There are 15 children in the age group of 4 to 10 years. Rest of the children are aged above 10 years.

There are two caretakers, a cook and an in charge in the home to take care of these children. The daily routine of the children of orphanage is as given in the table below:

There are children who have come here from distant places like Vijayawada also. It may be difficult for them to settle down in the orphanage, coping with it’s ways, initially. But gradually, they do begin to love the home.